Happy Thanksgiving from All of Us at VOTF

Help Me: A Thanksgiving Day Prayer

Thanksgiving Prayer
For each new morning with its light,
For rest and shelter of the night,
For health and food,
For love and friends,
For everything thy goodness sends. — Ralph Waldo Emerson 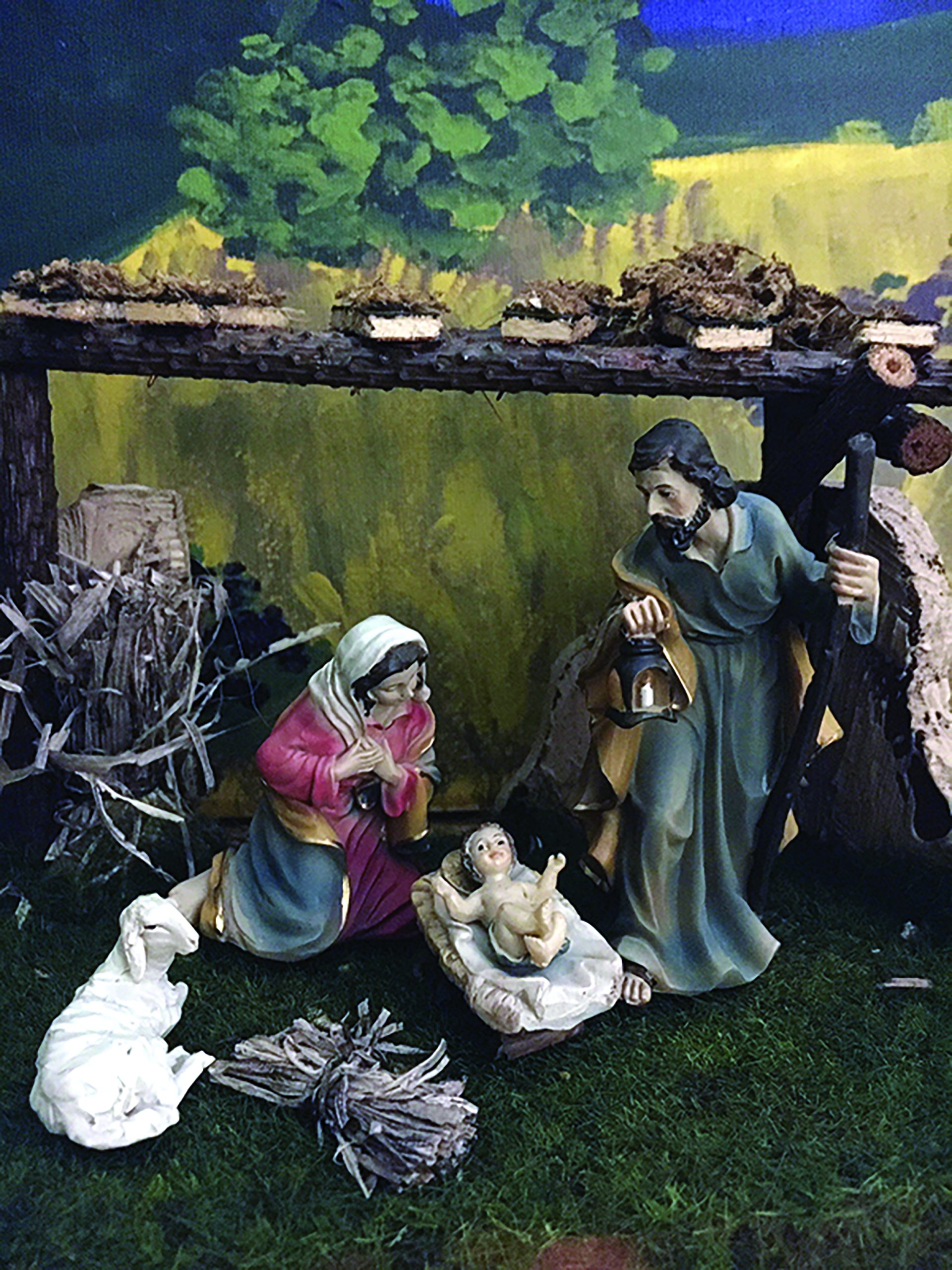 Which path to the stable will you take during Advent this year?

“How beautiful are the feet of those who bring the good news!”

What an image for us as we take our first steps on our journey in Advent. We are heading for Christmas, for the annual celebration of the birth of Jesus—the awesome gift of God who chose to become one of us. For each day during Advent 2019, Voice of the Faithful offers you three different Paths to the Stable, with Advent reflections and links to Scripture readings on each path.

Click here and choose your Path to the Stable …

Voice of the Faithful has completed its third annual study of U.S. Catholic dioceses’ online financial transparency. Among the study’s findings are that:

The study concluded that, although a majority of dioceses have made a commitment to financial transparency, a sizable minority share little or no verifiable financial information with their members. The average overall score achieved by all 177 dioceses comprising the United States Conference of Catholic Bishops in Voice of the Faithful’s 2019 report was 65.25%.

On Nov. 4, Barbara Born attended the “Future of Women in the Church” at the University of San Diego and filed this report on the event.

This was the first of a three part series giving voice to people in the pews. The next session in January will invite young people to reflect and dialogue on their future in the Church. A concluding session will provide an intergenerational dialogue on collaborative participation in the Church to live our baptismal promises.

I see this process affirming the synodality environment of the Diocese of San Diego. It affirms the need to listen and to give voice to people in the pews and “co-participation in leadership.” Following the sessions, organizers will send a synthesized report to Bishop Robert W. McElroy (in July 2020) with recommendations. They will develop a “playbook” for other Catholic universities to engage their dioceses in a similar process.

At the November meeting, 100-125 people attended, women and men across ethnic and generational spectrums. Sarah Hart, an OCP song writer, started the evening integrating music and spoken word of her life-long experiences as a woman in the Church and the challenges she sees for her daughters living their faith. We then had dialogues in a series of three small groups to tell stories, interspersed with large group sharing.

The group had a consensus that we could not leave the Church given the Eucharist, but so many challenges exist with the exclusion of women from full participation in the Church to fully use their gifts. Realistically, women only have a few “niche” places to serve, like faith formation or Catholic education.

There were a number of stories told about youth seeing the hypocrisy of the Church. A lady at an all girls high school told of a conversation on a senior retreat, where a student shared how she feels she can be anything in the world, yet her faith says no. The teacher could only empathize with her and had no real response.

Religious sisters were affirmed for positive role models in faith when they stand up for justice and make a presence in ways like standing with migrants when the broader Church fails to act.

Another concern was how so much is spent on education for priests and deacons, but women are excluded from this educational pathway. The role of non-profit organizations that contribute to polarization in the Church was a concern. Many of these are not part of Church “officially,” yet because they control so much funding they exhibit considerable influence.

Overall, the evening was acknowledged for providing a safe space to allow voices to be heard and the feeling that will be a good environment for youth invited to the January event to let them know they have a voice.

If You Missed It, You Can Still Catch the Videos

Church sex-abuse boards often undermine victims, help clergy
“Facing thousands of cases of clergy sex abuse, U.S. Catholic leaders addressed their greatest crisis in the modern era with a promised reform: Mandatory review boards. These independent panels with lay people in each diocese would review allegations fairly and kindly. And they would help bishops ensure that no abusive priests stayed in ministry. But almost two decades later, an Associated Press investigation of review boards across the country shows they have broadly failed to uphold these commitments. Instead, review boards appointed by bishops and operating in secrecy have routinely undermined sex abuse claims from victims, shielded accused priests and helped the church avoid payouts.” By Reese Dunklin, Mitch Weiss and Matt Sedensky, Associated Press

Does the Church get it on sex abuse? Classic Catholic reply is, ‘sic et non’
“Since last summer’s twin eruptions of the Pennsylvania Grand Jury report and the scandals surrounding ex-cardinal and ex-priest Theodore McCarrick, many Catholics have found themselves wondering if anything’s truly changed in the Church vis-à-vis the clerical abuse scandals. After decades of crisis and repeated vows of reform, they ask, is it possible the Church still doesn’t get it?” By John L. Allen, Curxnow.com

Catholic bishops’ new anti-abuse hotline to be ready soon
“A new national hotline to report sexual misconduct accusations against Catholic bishops in the U.S. could be operating by the end of February, three months ahead of the deadline set by Pope Francis. That forecast came Wednesday (Nov.13) from Anthony Picarello, general counsel for the U.S. Conference of Catholic Bishops, as the bishops concluded a three-day national assembly. The early start-up date would require all of the nearly 200 dioceses to be ready; church officials sounded optimistic that would happen.” By David Crary and Regina Garcia Cano, Associated Press

Cardinal Pell granted final appeal of conviction on sexual abuse charges
“Australia’s highest court has granted Cardinal George Pell leave to appeal his landmark conviction for sexually assaulting two choirboys in the 1990s, setting the stage for a new round of hearings next year to evaluate the historical conduct of the Vatican’s former No. 3 official. The High Court of Australia announced the decision to allow the cardinal a final appeal the morning of Nov. 13 in Canberra. Pell, who was sentenced to six years in prison in March, will remain in jail pending the court’s decision on his appeal, expected to come in 2020.” By Joshua J. McElwee, National Catholic Reporter

Catholic Church files to challenge law protecting sex abuse victims
“A Long Island Catholic diocese is suing to overturn the Child Victims Act, claiming the new law that protects sex abuse survivors, many of whom suffered at the hands of the church, is unconstitutional. The Diocese of Rockville Centre filed papers Tuesday in Nassau County Supreme Court against the act, which changed the statute of limitations for child sex crimes and opened up a year-long window where any child sex abuse victim can file a claim against their abuser, regardless of when the alleged crime happened.” By Gabrielle Fonrouge, New York Post

U.S. bishops elect L.A.’s Archbishop José Gomez as president
“Archbishop José H. Gomez of Los Angeles was elected by an overwhelming majority Tuesday (Nov. 12) to be the new president of the U.S. Conference of Catholic Bishops. Archbishop Gomez, born in Mexico and a naturalized U.S. citizen, is the first Latino elected to head the conference. Bishops meeting in Baltimore this week for their annual fall gathering also elected Archbishop Allen H. Vigneron of Detroit as vice president. The vice presidential election, which requires a simple majority of those bishops voting, took three ballots, with Archbishop Vigneron receiving the most votes on each ballot.” By Michael J. O’Loughlin, America: The Jesuit Review

Child sex abuse inquiry: Catholic Church ‘shocked to core by evil of clergy’
“The leader of the Roman Catholic Church in England and Wales has told an inquiry the Church was ‘shocked to the core’ by child sexual abuse perpetrated by members of the clergy. The Archbishop of Westminster, Cardinal Vincent Nichols, said the community had struggled to cope with ‘the presence of evil embodied in its members.’” By BBC News

Catholic bishops’ agenda: immigrants, gun deaths, sex abuse
“US Catholic bishops received a challenging to-do list Monday (Nov. 11) as they opened their national assembly — notably to support immigrants and refugees, extend the campaign to curtail clergy sex abuse and work harder to combat gun violence. They also were urged by Pope Francis’ envoy to be more vigorous in promoting sometimes-divisive segments of the pope’s agenda. ‘The pope has emphasized certain themes: Mercy, closeness to the people… a spirit of hospitality toward migrants, and dialogue with those of other cultures and religions,’ Archbishop Christophe Pierre, the papal nuncio, told the bishops as they opened a three-day meeting. ‘Do you believe these are gradually becoming part of the mindset of your clergy and your people?’” By David Crary and Regina Garcia Cano

Pope Francis Calls for an End to Nuclear Weapons

Pope Francis visited Japan this week and echoed the call of Japanese bishops for an end to nuclear weapons. During his visit, Pope Francis spoke to a survivor of the Hiroshima bombing, and will also meet with the victims of the “triple disaster” – the 2011 earthquake, tsunami and Fukushima nuclear incident which killed more than 15,000 people – and with local Japanese authorities.

“We will be judged on this,” he said. “Future generations will rise to condemn our failure if we spoke of peace but did not act to bring it about among the peoples of the earth.”

To read more coverage of the Pope’s visit to Japan, check these stories:

Pope in Japan condemns those who invoke peace, but keep nuclear arms

As Joan Chittister said recently: “If women can’t even get a pronoun in this church, how do they expect to get the diaconate?”

I’m glad someone is still fighting for what’s good and right for the church in America.

Phyllis Zagano, PhD., an internationally recognized expert on the history of the women’s diaconate in the Catholic Church and a member of the Papal Commission on Women Deacons, is hosting a Zoom meeting on women deacons, and you are invited. Sister Colleen Gibson, S.S.J., will moderate. The event takes place on Dec. 4, 2019, at 7:30 p.m. Eastern Time (U.S. & Canada). You may register for this meeting by clicking here.

After registering, you will receive a confirmation email containing information about joining the meeting. Please let others know about this important, informative and worthwhile meeting.