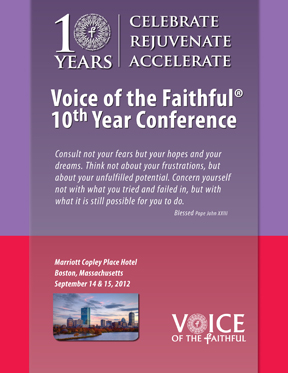 “Consult not your fears but your hopes and your dreams. Think not about your frustrations, but about your unfulfilled potential. Concern yourself not with what you tried and failed in, but with what it is still possible for you to do.” Blessed Pope John XXIII.

A priest from a missionary diocese in northern Alaska received Voice of the Faithful’s® Priest of Integrity Award during VOTF’s 10th Year Conference in Boston Sept. 14-15. Fr. Patrick Bergquist is a priest in the Roman Catholic Diocese of Fairbanks, Alaska, the largest in the country, spreading across 410,000 sq. mi. of northern Alaska.

The chairman of the National Board for Safeguarding Children in the Catholic Church in Ireland, John Morgan, presented his views on the similarities and differences between child protection efforts in Ireland and the United States and on reform within the Roman Catholic Church to help prevent clergy sexual abuse during the Voice of the Faithful® 10th Year Conference taking place in Boston, Sept. 14-15.

Voice of the Faithful® presented its 2012 St. Catherine of Siena Distinguished Layperson Award to Joseph F. O’Callaghan and Phyllis Zagano during VOTF’s 10th Year Conference in Boston Sept. 14-15. This recognition was the fourth and fifth times in its 10-year history VOTF has presented the award. The St. Catherine of Siena Award recognizes exemplary lay leaders who enthusiastically use their gifts in the Church’s service and whose example encourages all Catholics to use their talents for the betterment of the Church.

VOTF’s 10th Year Conference agenda has been revised to accommodate a special preview screening of the HBO documentary film Mea Culpa: Silence in the House of God. You must be registered for the conference to view this special screening, and seating is quite limited. If you have not yet received an invitation to the screening, send your e-mail address to nickingala@votf.org.

Two to Receive St. Catherine of Siena Distinguished Layperson Award During Voice of the Faithful 10th Year Conference in Boston

NEWTON, Mass., Aug. 10, 2012 – Two Roman Catholic lay people will receive Voice of the Faithful’s® St. Catherine of Siena Distinguished Layperson of the Year Award during VOTF’s 10th Year Conference in Boston next month. This recognition represents only the fourth and fifth times in its 10-year history VOTF has presented the award.

NEWTON, Mass., June 18, 2012 – The worldwide Catholic Church reform movement Voice of the Faithful, which started in 2002 in outrage and dismay that the Church’s power structure had kept clergy sexual abuse of children secret, is marking its tenth year with a conference in Boston this September. The event is expected to draw supporters from across the United States and Europe.

See you in September in Boston!