Women at All Levels in the Church

Women now serve in many leadership positions in the Church, but their influence is tempered by clericalism, patriarchal mindset, and absence of women in top positions of important offices like Vatican congregations. And, of course, no women are clerics.

VOTF has been raising our voices for Church renewal for 15 years. Now, with increasing momentum, we see others joining our calls for transparency, for accountability, and for pushing back against clericalism — not just here, but worldwide.

Read below what Australian priest Fr. Peter Day, for example, suggests for Church reform. Note how similar the steps are to VOTF’s calls for renewal … like equality for women in the Church. One simple step forward now? Restoring the ordination of women deacons. It’s long past time. 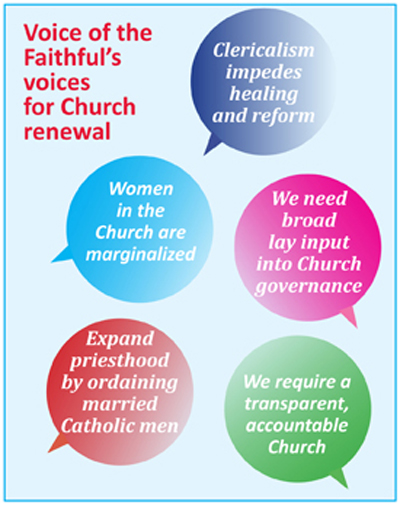 Pope Francis and the Homeless

This spring, Pope Francis opened a laundromat for the homeless. The laundry is open three days a week and homeless men and women can come in to wash their clothes. Watch a video about it and be inspired.

Paul Shanley, one of the most notorious priests involved in the Catholic sex abuse scandal, was released this week (He was releases on Jul. 28) after serving 12 years in prison. Convicted of raping a child in the early 1980s, Shanley was one of the few priests for whom the statute of liimtations had not expired; Middlesex County prosecutors had hoped to keep Shanley behind bars.

Here’s what Michael Levenson of The Boston Globe wrote on the release: “Paul R. Shanley, a former ‘street priest’ … is set to be released from prison as early as this week after serving 12 years behind bars for raping a Sunday school student in the early 1980s. Middlesex prosecutors said they had hoped to keep the 86-year-old defrocked priest behind bars even after his sentence was completed by having him declared a “sexually dangerous person.” But two doctors who examined Shanley found that he did not meet the required criteria, prosecutors said.”

Kevin Cullen, also in the Globe, compared the recent death of Joe Crowley, one of Shanley’s victims, with the release: “It seems achingly unfair that Joe Crowley is dead and Paul Shanley is about to go free. Shanley, a predator in a Roman collar, is wrapping up a 12-year sentence for raping a Sunday school student in the early 1980s. Some have the audacity to suggest that Shanley was overpunished, that he got more time in prison than he deserved because he eluded justice for his multitude of other crimes on technical grounds. Fine. So Paul Shanley is the O.J. Simpson of the clergy sexual abuse scandal. It is what it is. The reality is that Paul Shanley ruined countless lives, including Joe Crowley’s, and he was never held accountable or punished for that. Shanley got off easy, if you ask me. The bigger scandal is that so many of his fellow predators, and their supervisors, never saw the inside of a prison cell.”

A first: Cardinal Pell appears in Australian court on sexual charges
“Cardinal George Pell, one of Pope Francis’ top advisers, made his first court appearance in Australia on Wednesday (July 26) after becoming the highest-ranking Roman Catholic prelate to be formally charged with sexual offenses. Cardinal Pell, 76, was flanked by police officers as he entered Melbourne Magistrates’ Court through a thicket of camera crews, reporters and photographers.” By Jacqueline Williams, The New York Times

547 members of Catholic boys choir abused, report says
“At least 547 members of a prestigious Catholic boys’ choir in Germany were physically or sexually abused between 1945 and 1992, according to a report released Tuesday (Jul. 18). Allegations involving the Domspatzen choir in Regensburg were among a spate of revelations of abuse by Roman Catholic clergy in Germany that emerged in 2010. In 2015, lawyer Ulrich Weber was tasked with producing a report on what happened.” By Associated Press on CBSNews.com

Ex-Vatican doctrine chief says Church did what it could on German abuse scandal, By Ines San Martin, Cruxnow.com

Former top Vatican official strikes back at Pope
“A top Vatican cardinal recently dismissed by Pope Francis struck back this week, calling the Pope’s treatment of him and other Vatican employees ‘unacceptable.’ ‘I cannot accept this way of doing things,’ Cardinal Gerhard Muller said in an interview with German newspaper Passauer Neue Presse. ‘As a bishop, [the Pope] cannot treat people in this way.’ Francis informed Muller, the former head of the Congregation for the Doctrine of the Faith, Vatican’s doctrinal office, that he would not be renewing his contract in a brief meeting on June 30, just two days before the contract expired.” By Delia Gallagher, CNN

First Vatican trial under laws against financial crime to open Tuesday
“Tuesday (Jul. 18) sees the start of the Vatican trial of two former officials of a papal hospital in Rome charged with illicitly using funds to renovate the Vatican apartment of Cardinal Tarcisio Bertone, in a way that benefited a fellow Italian businessman. Bertone himself was not an object of the Vatican investigation and does not face any charges in the trial, which marks the first prosecution under new Vatican laws on financial crime.” By Ines San Martin, Cruxnow.com