Amidst the cards and notes you receive this year will be a letter from us, asking you to please remember VOTF when you plan your end-of-year giving. Without your support, we could not do the work we do: continuing to raise our voices to protect the vulnerable, support priests of integrity, and promote needed reforms. Your generosity keeps VOTF alive.

So when you receive our appeal in the mail this Christmas season, please give.

The word Advent comes from the Latin advenio, “to come to,” and refers to the coming of Christ. Join Voice of the Faithful as we make our Advent journey toward celebrating the Incarnation of Jesus this Christmas season. We are repeating and updating our popular Advent calendar reflections for 2016. 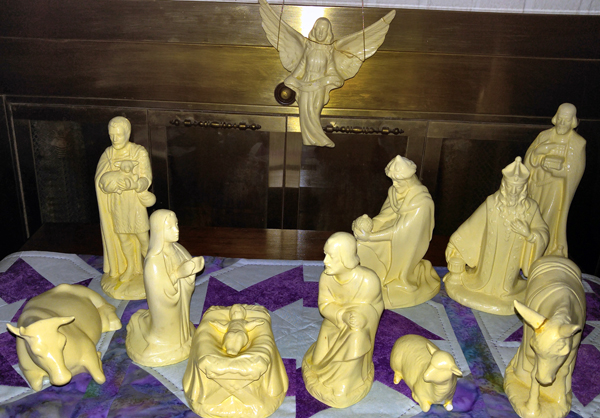 Every day during Advent, our virtual Advent calendar presents a reflection, a crèche image, and a link to readings from the liturgical calendar for that day to help you prepare for the birth of Jesus. Click here for the December 5 reflection, and from there, you will be able to navigate through the entire Advent season by using the links at the bottom of each page.

To receive an email each day during Advent with a link to “open a window” on our virtual Advent calendar for that day, go to our homepage at voiceofthefaithful.mystagingwebsite.com, click the SIGN UP FOR OUR E-NEWSLETTER button in the right-hand column, and follow the directions.

Spend time with us this Advent reflecting on the type of Church that Jesus would want to call His. Meditate and pray for the healing and renewal of the Church that we love so much.

P.S. Clare Keane (Winchester MA) made the nativity scene above in a U.S. Army craft shop back in the 1960s. You can find it and the reflection on the Nov. 28 Advent Calendar posting.

Join Professor Thomas Groome, Director of the Church in the 21st Century Center, as he shares the importance of hope during this season of waiting in the latest Godpod: An Advent Reflection. It’s a beautiful reflection on waiting and listening to God.

Our Voices column comes from Augustinian Fr. Paul F. Morrissey, who wrote The Black Wall of Silence. As he relates below, he experienced “two sides” when attending one of our VOTF Healing Circles: as part of a personal spiritual journey, and as a priest who thus has “authority” in the Church. This article first appeared in National Catholic Reporter.

“Having the horror heard helps to heal the hurt.”

My stepmother, Dot, shared her wonderfully alliterative mantra with me years ago as we pondered the benefits of a person going to a counselor when stuck in pain. In her wise and eye-twinkling way, Dot — whose husband had been struck by a car and killed many years before, leaving her with 12 children to raise — was telling me how she had survived.

After my mother died suddenly from brain cancer at 64, my father, Tom, was traumatized with grief and seemed to be on his way “out of the picture,” as he used to say of others who had died. One of my nine sisters, Kate, challenged him to get up and start living again. “Because at least you had a life before Mama, but we never did,” she reminded him. My father not only started to live again, five years later he married Dot. Between the two of them — Dot with her 12 kids, and Tom with his 14 — they had 26 mostly grown children. Talk about having the horror heard!

Dot’s mantra shows how she understands people getting over the pains of life. They need to be heard. If someone is willing to listen to the horrors that befall us, it feels like we are not alone. We can bear it and even find meaning in it. As St. Paul wrote to the Galatians, “Bear one another’s burdens and so you will fulfill the law of Christ.” Continue reading …

Two for One: Use Amazon / Support VOTF

You can easily include VOTF as a bonus with any gifts purchased through Amazon.com. Simply use our Amazon link and when you land at Amazon.com, and make a purchase, a portion will benefit VOTF. Every gift counts! Thank you for the boost.

Listen to some Catholic women this Advent. Catholic Women Preach, a wonderful new series that invites Catholic women to break open the readings on Sundays. https://www.catholicwomenpreach.org/

Fall of an archbishop; Byrnes set to arrive, steps in for Apuron
“When Archbishop Michael Jude Byrnes arrives today (Nov. 28), he will step into a fractured community of the faith. Officially, he is coming to assist Archbishop Anthony Apuron in running the Archdiocese of Agana … Apuron faces what an archdiocese spokesman described as ‘credible accusations of child sexual abuse against him,’ and a canonical trial is being prepared in Rome.”
By Haidee V. Eugenio and Dana M. Williams, Pacific Daily News

Pope Francis’ race against time to reshape the Church
“Francis is trying to build a Roman Catholic Church that emphasizes inclusion and mercy, and focuses on serving poor and marginalized people. Can the 79-year-old pontiff appoint enough like-minded cardinals to ensure that his vision of the church will endure after he dies?” By Laurie Goodstein, The New York Times

Vatican judge says cardinal-critics of pope could lose red hats
“According to a senior Vatican judge, four cardinals, including American Raymond Burke, who recently published a letter in which they asked Pope Francis to clarify his document on the family, Amoris Laetitia, could lose their red hats over what he termed the ‘very grave scandal’ they’ve caused … ‘What they [the cardinals] have done is a very grave scandal, which could even lead the Holy Father to take away their red hats, as it’s happened already in some other times in the Church,’ (Fr. Pio ) Vito Pinto said.” By Ines San Martin, Cruxnow.com

— Dean of Rota warns Pope could strip Card. Burke & others of cardinalate, By EWTN.co.uk

Pope Francis dismisses critics of his teachings
“Pope Francis is firing back at foes of his efforts to make the Catholic church more open and pastoral in its ministry, telling an interviewer that ‘they are acting in bad faith to foment divisions.’ The pontiff’s lengthy interview in ‘Avvenire,’ the official newspaper of the Italian hierarchy, was published Friday (Nov. 18) and followed days of news coverage of demands by four hard-line cardinals who have grave concerns about Francis’ approach.”
By David Gibson, Religion News Service, in National Catholic Reporter

Why does Connecticut lead the nation in disaffected Catholics?
“Now Connecticut can add another number one to its list: it is tops, according to a 2015 Pew study, in the percentage of baptized Catholics who no longer consider themselves Catholics … Nationwide, over a seven-year period from 2007 to 2014, self-identifying Catholics in the U.S. population fell from 23 to 20 percent. Connecticut leads with a 10 percent drop.” By Peter Feuerherd, National Catholic Reporter

The Pope asks us to pray that the scandal of child soldiers be ended in his December prayer intention.

Please send them to Siobhan Carroll, Vineyard Editor, at Vineyard@votf.org (link sends e-mail). Unless otherwise indicated, I will assume comments can be published as Letters to the Editor.

© Voice of the Faithful 2016. All Rights Reserved.