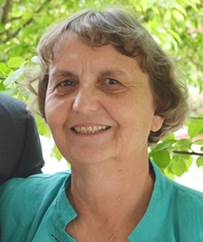 Long-time VOTF leader Kathy Weyer, who presently serves as president of Greater Cincinnati VOTF, is being honored with a Champions for Change Award from the Cincinnati-area Family Nurturing Center.

Family Nurturing Center is a non-profit social service agency located in Northern Kentucky and Hamilton County, Ohio. The center is dedicated to ending the cycle of child abuse by promoting individual well-being and healthy family relationships. The organization presents the Champions for Change Award to persons committed to creating a culture of change for how society views and responds to child abuse.

Read about the Award and Kathy’s work

VOTF in the Diocese of Bridgeport, Connecticut, in an extension of its contacts with Bishop Frank Caggiano, will send delegates to the diocesan synod to begin this fall and run through the diocese’s next fiscal year. An article announcing the synod, which appeared in the July 15 Darien Times, said, “The process has already begun, with parishes and schools throughout Fairfield County that belong to the diocese choosing delegates to represent them during the spring.”

Bishop Caggiano said the synod will involve 300 to 400 delegates and a parallel meeting among young people. Among the groups represented will be immigrants, ethnic groups, and Voice of the Faithful. Diocese communications director Brian Wallace told The Darien Times earlier this year that “one of the first things Bishop Caggiano did after arriving here was to reach out to the Voice of the Faithful, and in four months he has had several conversations with the VOTF leadership.”

Click here to read the entire article in The Darien Times.

Dr. Marc Steinberg, professor of sociology at Smith College in Northampton, Massachusetts, and Dr. Patricia Ewick, professor of sociology at Clark University in Worcester, Massachusetts, recently shared some reflections on their study of VOTF over the last seven years. Both sociologists addressed an audience of VOTF members. The last issue of In the Vineyard included the speech by Dr. Ewick. Following are some excerpts from Dr. Steinberg’s speech:

Remarks for the 12th Anniversary of the WAVOTF

First a confession. I know that I’m supposed to do this elsewhere in the building, but I hope you’ll indulge me this moment, since it’s the first time I’ve confessed in a church. I didn’t start out with the intention of studying the VOTF or this group in particular. Actually I recruited Patty for a study on church occupations during the archdiocese’s reorganization and the parish closings connected with it. I was intrigued by the ways in which the occupiers of those churches laid claims to their parishes, both through civil and canon law, and wanted to examine how they stood up to the archdiocese through those legal claims. I turned to Patty because she is a well-known expert in the sociology of law, of which I knew very little.

Patty agreed, but suggested that we not jump straight into the middle of that controversy. She persuaded me that we should first get a sense of the range of activism in the archdiocese to understand the particular position and claims of the occupiers. Patty took up the task of investigating other organizations, and she suggested a visit here.

My first experience here was wandering into a packed church for a scheduled event. I kept trying to ascertain the sheer number of people during her re-enactment, and lost count many times. After the event I went home and thought to myself, Wow, let’s put the study of the occupiers on hold. That church was packed! The uprising is here! And it has panache and humor to boot!

Highlighting issues we face working together
to Keep the Faith, Change the Church

Revelations spark calls for cardinal to step down
“Revelations concerning Cardinal Sean Brady’s involvement in a 1975 canonical inquiry into Fr. Brendan Smyth’s abuse of Brendan Boland have sparked fresh calls for the Catholic Church’s most senior churchman to stand down. Marie Kane, who was one of six survivors who met Pope Francis two weeks ago in the Vatican, has threatened to write again to the Pope if Dr Brady does not offer his resignation.” By Sarah MacDonald, Irish Independent
— Priests tried to ‘blame and shame me’ at meeting in front of Brady, claims abuse victim, By John Spain, Irish Independent
— Calls for Cardinal Brady’s resignation over cover-up, By Sarah MacDonald, The Tablet

Pope Francis to visit U.S. in 2015, Philadelphia archbishop says
“Pope Francis will make his first visit to the United States in September 2015, visiting Philadelphia for the World Meeting of Families, according to Philadelphia Archbishop Charles Chaput. However, the Philadelphia Archdiocese said there is no official confirmation from the Vatican of the Pope’s visit.” By Michael O’Loughlin and Ines San Martin, The Boston Globe
— Papal trip to the U.S., Mexico not confirmed, By Vatican Radio

Vatican revising canon law on abuse penalties, cardinal says
“Church law has procedures and penalties for effectively dealing with allegations of clerical sexual abuse, but the Vatican is working to revise a section of the Code of Canon Law to make those norms and procedures clearer and, therefore, more effective, said the president of the Pontifical Council for Legislative Texts.” By Cindy Wooden, Catholic News Service

Judge rejects archdiocese plea to drop clergy abuse case
“The clergy sex abuse lawsuit against the Twin Cities archdiocese will move to a jury trial, a Ramsey County district judge ruled Monday (July 21). Attorneys for the Archdiocese of St. Paul and Minneapolis and the Diocese of Winona had asked the court for a summary judgment that would dismiss the case. But Judge John Van de North said a jury trial would proceed, now set for Sept. 22.” By Jean Hopfensperger, Star Tribune

Outside group wants to open bishop selection process to laity’s voice
“A national organization advocating change within the Roman Catholic church wants local parishioners to use the group’s website to tell church fathers who should be the diocese’s next bishop. ‘Church law encourages all Catholics to express their views on Church matters that concern them, and this includes who their new bishop may be,’ Nick Ingala, a spokesman for Voice of the Faithful, said Tuesday (July 29).” By Bill Dolan, The Times, on nwi.com

VOTF Mission Statement
To provide a prayerful voice, attentive to the Spirit, through which the Faithful can actively participate in the governance and guidance of the Catholic Church.

Summer is a slow time. But at VOTF, we continue our work.

Study Scripture at St. Susanna, Dedham, Massachusetts
According to Tim Sullivan, Coordinator of Scripture Study at St. Susanna’s, “No Gospel writer is more concerned with the mercy and compassion of Jesus. No Gospel writer is more concerned with the role of the Spirit in Jesus and the Christian disciple or with Jesus’ concern for women.” These are excerpts from the introduction in the Bible to the Gospel of Luke. On September the 16th you are invited to begin the study of this Gospel at Saint Susanna Parish.

The course is 12 weeks total: the first 6 weeks this fall and the second 6 weeks in the spring. Meetings areTuesday evenings from 7 to 9 in the St. Susanna parish library. The sessions include lesson discussion, sharing of faith journeys, and a 20-minute video produced by the Little Rock Scripture Study scholars.

St. Susanna will provide the text and a workbook but to ensure that there are enough, please sign up as soon as possible so they know how many books to order.

You need no experience in Scripture Study to engage in this course. Please contact Tim Sullivan for more details.
Tim Sullivan tim.sull@yahoo.com

Please send them to Siobhan Carroll, Vineyard Editor, atVineyard@votf.org. Unless otherwise indicated, I will assume comments can be published as Letters to the Editor.