By Svea Fraser, Voice of the Faithful 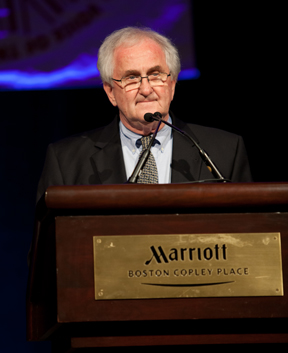 Reverend Donald B. Cozzens was a steadfast supporter of our mission and goals since VOTF’s earliest days. While we mourn his death, we give thanks for the friendship, counsel, and inspiration he gave to so many of us.

In speaking of Don, it is difficult to know what to call him: He was an ordained priest, but he also identified with all the baptized. He seemed most comfortable when being called “Don” or by qualifying his title in introductions as “our brother, Father Don Cozzens”—a reflection of his desire to break down barriers dividing clergy and laity.

Fr. Cozzens was a priest who challenged the status quo in his words and actions, in his many books, in his lectures and preaching, and in his generous offers of counsel and encouragement. He did so with courage and compassion, with wit and wisdom, and always with unflinching honesty.

Don spoke of the dangers of clericalism, the importance of integrity, and the inability of hierarchical failures to meet the pastoral needs of the people today. Aware of those forces within the Church who resisted his words, he also understood that wanting to be held in favor “makes cowards of us all.”

His example of ecclesial loyalty and personal integrity was an inspiration for clergy and lay alike. He gave us a critical vision of what the Church can be: a Church where all the People of God—clergy and laity, women and men—inspired by the Holy Spirit, could be the Gospel people Jesus calls us to be.

In 2009, Voice of the Faithful honored Don with our Priest of Integrity award. At first, he deflected the attention focused on him and pleaded his unworthiness. However, we prevailed, and we were pleased to honor him with the recognition. In his acceptance speech, Fr. Cozzens noted that this was the “Year of the Priest.” He suggested that the following year should be named the “Year of the Laity.”

Don had a deep and compassionate understanding of human nature, and he was a consummate storyteller. He entertained and engaged people where they were, welcoming and listening to our cares and concerns. He offered insights and encouragement in the work we were doing.

In one story, Don told of three travelers on a hot afternoon who were pushing wheelbarrows piled high with bricks. As the first approaches, he is asked “what are you doing?” Irritated and tired the man answers, “I’m pushing this wheelbarrow loaded with bricks!”

As the second man draws near, he is asked the same question but gives a different answer: “I have a family to support. They have to eat, and I have to work to feed them.”

The third worker, when asked, stops and puts down his load. With pride and dignity, he responds: “What am I doing? I’m building a cathedral!”

Like these workers, we too are engaged in hard work, the work of building the reign of God, one brick at a time!

We will miss our brother deeply, but we can carry on his legacy by continuing the struggle for the moral integrity of our Church.

May you rest in peace, Father Donald B. Cozzens, our brother. You have fought the good fight, you finished the race, you kept the faith. May God grant you the crown of righteousness that you so richly deserve.

Funeral services for Fr. Don Cozzens are as follows: